THE discovery of a previously unknown carved Pictish stone at an early Christian church site in the Dingwall area is of “national importance” and a "once in a lifetime find", delighted archaeologists believe.

The stone, which was thought to have to been carved around 1200 years ago, is decorated with a number of Pictish symbols and it is likely to have originally stood more than two metres high.

It was first recognised earlier this year by Anne MacInnes of the North of Scotland Archaeological Society whilst undertaking a survey of the church site.

She said: “I was clearing vegetation when I spotted the carving. I really couldn’t believe what I was seeing.”

The find was subsequently verified by archaeologists from Highland Council and Historic Environment Scotland.

And on Thursday the stone was safely removed from the site by specialist conservators. It will now be professionally conserved with a view to ultimately putting it on permanent public display at a Highland museum or other suitable venue.

The stone, which was reused as a grave marker in the 1790s, currently measures 1.5 by 0.6 by 0.2 metres. However it is broken and experts believe it may have originally stood up to 2.4 metres high.

The stone is decorated with a number of Pictish designs including several mythical beasts, oxen, an animal headed warrior with sword and shield, and a double disc and z rod symbol. 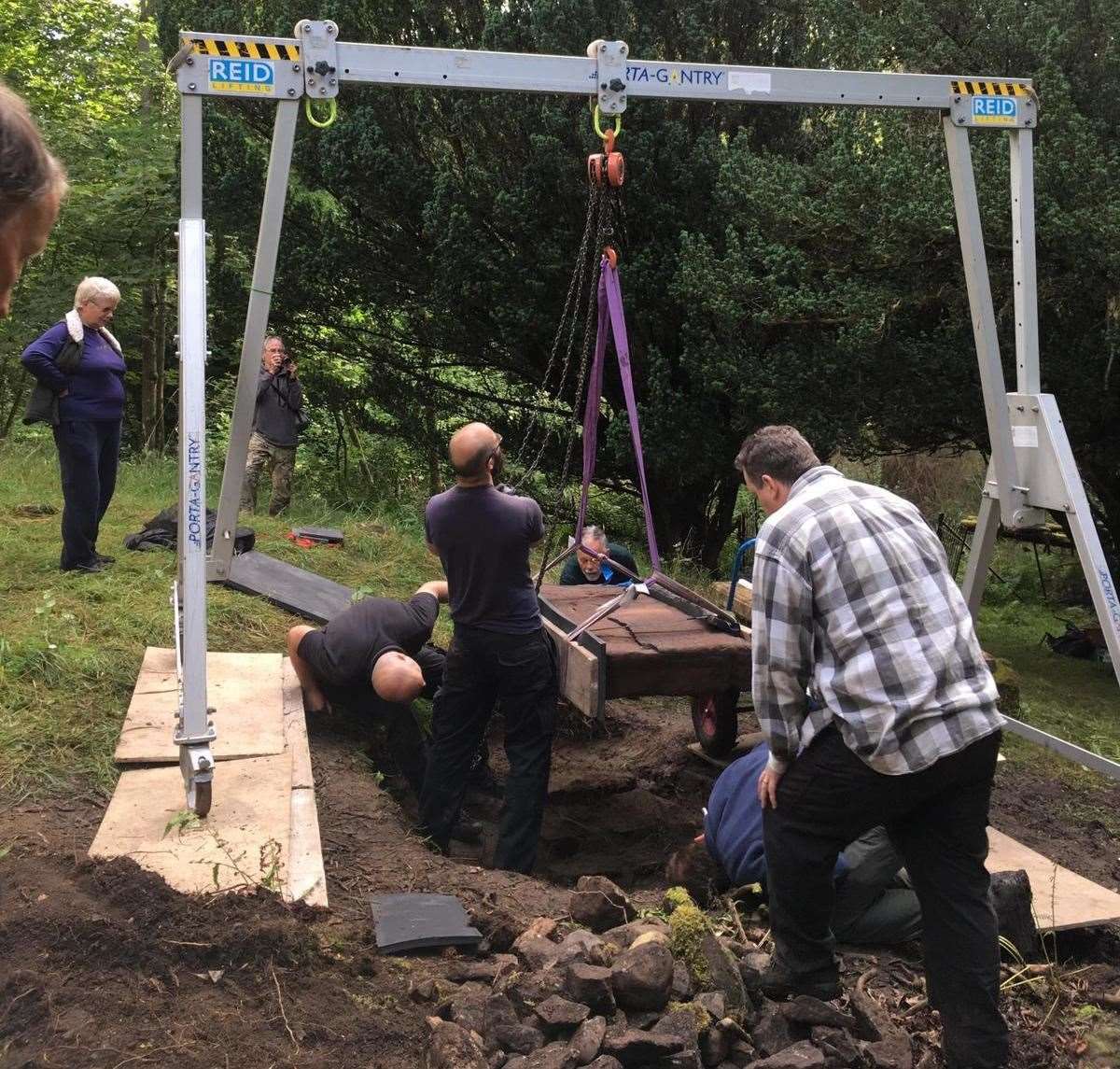 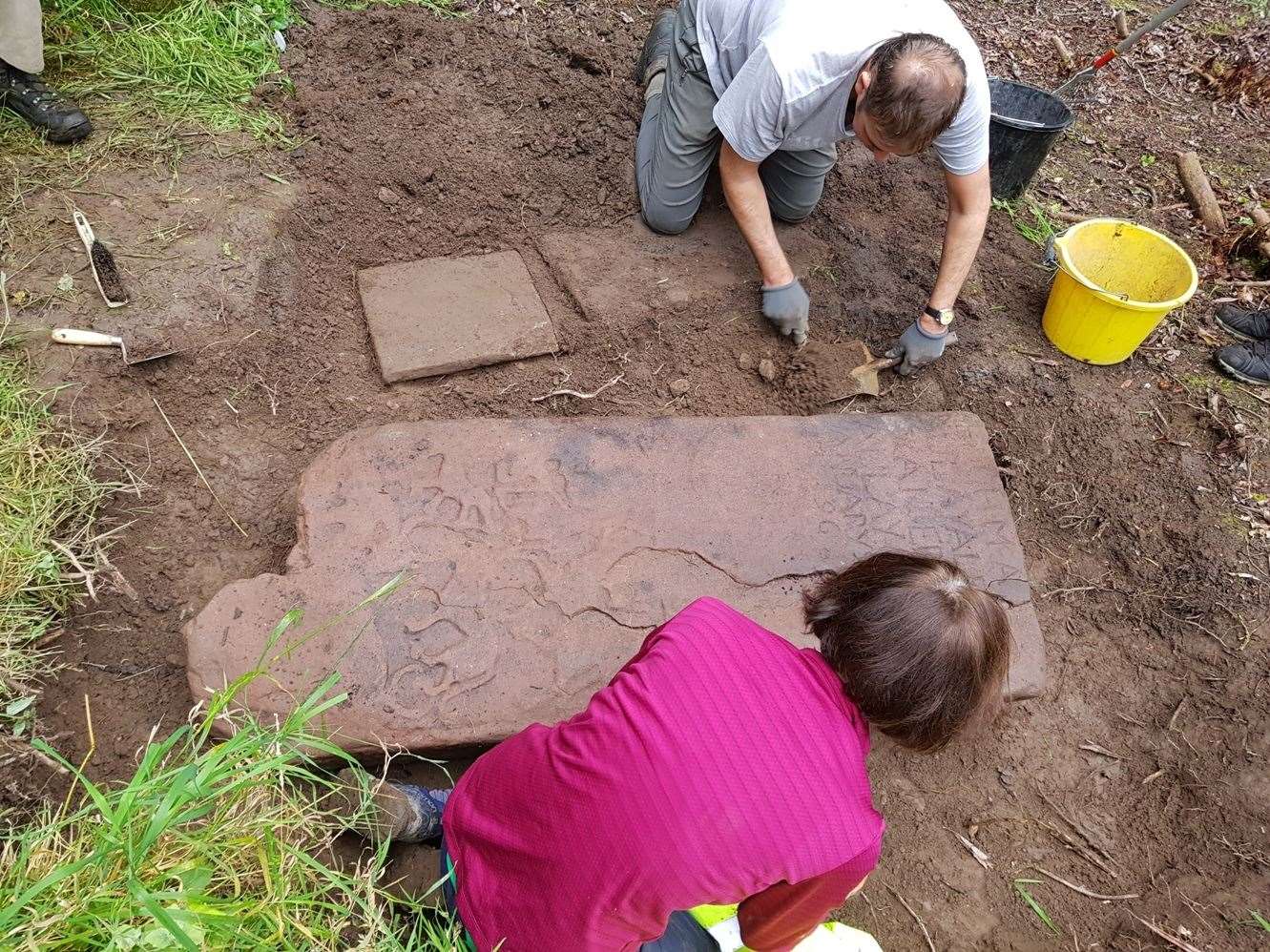 Details of the carvings on the reverse side are not yet known, but based on examples from similar stones they are likely to include a large ornate Christian cross. This will make it one of only about 50 complete or near complete Pictish cross-slabs known in the world, and the first to be discovered on the Scottish mainland for many years.

John Borland, Measured Survey Manager with Historic Environment Scotland and President of the Pictish Arts Society, stated that “the discovery of the top half of a large cross slab with Pictish symbols is of national importance.

The find spot – an early Christian site in Easter Ross – is a new location for such sculpture so adds significant information to our knowledge of the Pictish church and its distribution, This new discovery will continue to stimulate debate and new research.“

The first stage in preserving this important new find – the stone’s safe removal – sees the North of Scotland Archaeological Society, the Pictish Arts Society and the Highland Council Archaeologist working hand in hand with the goodwill of the landowner.

Historic Environment Scotland has already recorded part of the stone and this work will be completed before expert conservation work commences. Money is pledged for the stone’s removal by the North of Scotland Archaeological Society and the Pictish Arts Society, but funding is currently being sought for the specialist cleaning, conservation and repair process.

Kirsty Cameron, the Highland Council archaeologist, said: “This is a once-in-a-lifetime find and what started as a small recording project has resulted in the identification of not only this important stone but also that the site itself must be much older than anyone ever expected.

"All credit goes to the local archaeologists for immediately recognising the importance of the stone and putting plans in place for securing its future.”

Mr Borland went on to say that “some of the best examples of complete cross slabs can be found in Easter Ross. However this new carving appears to have little in common with its relatively near neighbours.

"Of course the cross side is as yet unseen and when it is visible, this analysis may change. But for the time being, some of the figurative carving on the symbol-bearing side appears to have more in common with distant counterparts as far south as Perthshire.

"This may tell us something of the complex web of influence between important ecclesiastical sites in one part of Pictland and their far-flung satellite churches elsewhere.”