An Easter Ross community woodland targeted by vandals has become a "priceless asset" during the coronavirus crisis, providing a safe haven for scores of people during one of the most uncertain periods in living memory.

A string of surveys released over the past few months have highlighted the growing value people place on outdoor spaces for both physical and mental wellbeing at a time when some have been cooped up inside for the best part of four months.

Scottish Natural Heritage last week found levels of participation in outdoor pursuits – ranging from more time in the garden to woodland walks – has mushroomed during the pandemic.

"We are always delighted to see responsible use of the wood by families and other small groups. We are looking after a priceless asset and hoping to encourage greater use of the woodland environment – but not by those few who are out to cause damage."

Its chief executive, Francesca Osowska, said: “Nature is at the heart of our emergence from this crisis. The results from this survey reinforce just how important nature is for all of us – both physically through exercising and emotionally for our mental health.”

That picture has been echoed in Evanton Community Woodland where volunteers have been buoyed by the response of visitors despite some recent mindless acts of vandalism. Damage to benches was immediately repaired by big-hearted volunteers.Vandals overturned four benches and dislodged a brick from the barbecue to smash the patio door window. The wood committee is working with local police to identify culprits and prevent further such behaviour.

Villagers bought over a swathe of Evanton Wood with support from the Heritage Lottery Fund back in 2012 after a six-year campaign. The lottery fund put up £321,000 towards the project, most of it towards the purchase of the woodland and the rest for a five-year plan which has seen its use by a wide variety of groups increase dramatically.

Adrian Clark, secretary of the group overseeing the woodland, said: "We are always delighted to see responsible use of the wood by families and other small groups. We are looking after a priceless asset and hoping to encourage greater use of the woodland environment – but not by those few who are out to cause damage." 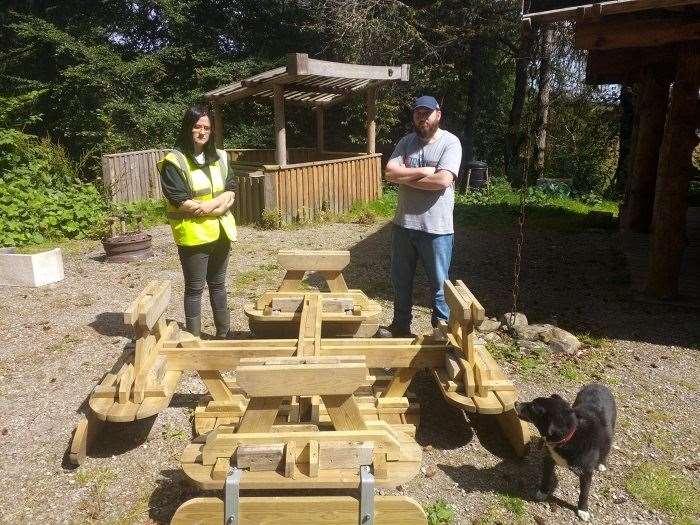 Three Syrian families making new lives in Ross-shire made their first visits in recent days and were delighted by what they found. Jenny Gray, from Evanton, a teacher of English as an additional language, had encouraged them to make the visit. They said they had a “special time” and plan to spend longer on their next visit.

Bryan Maclennan and Kelsea Herbst, both from Alness, are regular volunteers. Mr Maclennan, who has been helping each week for over four years, said of recent damage: “It is disappointing when people have such little respect for the work of others.”

Morag and Melvine Lynch, aged 14 and 17, from Evanton, are regular users of the wood and have often helped out. They also voiced disappointment over the vandalism at the cabin and in the woods saying that it unfairly gives a bad name to all the teens in the village.

They said it would be sad if that prevented young people from using the woods to meet friends as they don’t want to be mistaken for trouble-makers. Melvine said: "People have worked so hard to keep the place nice and welcoming to everyone. This is so disrespectful to treat it like that.”

Have you discovered an outdoor refuge in Ross-shire during the coronavirus crisis? Share your pictures and stories by emailing hector.mackenzie@hnmedia.co.uk